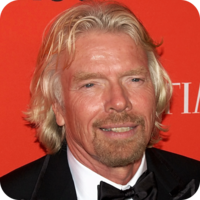 Richard is an entrepreneur, adventurer and founder of the Virgin Group.

Richard Branson is an entrepreneur, philanthropist, space traveller and founder of the Virgin Group. The Virgin Group is a conglomerate with business interests in entertainment, health & wellness, people & planet, technology and travel & Leisure.

At just 16 years old Richard launched his first business, a magazine called Student. Richard built on the success of his first business and started Virgin Records, a chain of record stores and later started the airline, Virgin Atlantic.

Richard was knighted by the Prince of Wales for his “services to entrepreneurship” in March 2000. Branson got global acclaim due to his successes in business, his love for adventure and his kind heart for philanthropy.

Richard Branson is the author of many books including Finding My Virginity, The Virgin Way, Like A Virgin, Screw Business As Usual, among other books. Richard has also made cameo appearances in TV Shows like Friends, Baywatch and movies like Around the World in 80 Days and Casino Royale.

Richard is married to Joan Branson and they have two children, Holly Branson and Sam Branson. Richard is a granddad to Lola, Artie and Atta, and Bluey Rafe. Richard's mother, Eve Branson is the first mother in history to have a spaceship name after her. Please see additional pictures and links below.

Richard is also the founder of Virgin Unite, the charitable arm of the Virgin Group and here all funds from Richard's speaking engagements go to this charity.

This website is created and maintained by the Inspirational People non-profit organisation. The above image has been cropped from original by David Shankbone, CC BY 3.0 via Wikimedia Commons.

Richard has had a lifelong dream to travel to space, a dream that was confirmed in a live television show back in 1988 when asked by a caller if he was considering going to space.

From 1996 Virgin Cola released 500ml bottles marketed as "The Pammy", as their curves were designed to resemble Pamela Anderson who was at the height of her popularity in the UK at the time.

Richard with his two children, daughter Holly and son Sam.

Holly is Chair of Virgin Unite (the Virgin Group's foundation) and a founder and trustee of Big Change.

Sam produces movies and stars in many including Superman Returns and Requiem for Krypton: Making 'Superman Returns'. Richard also starred in the latter.

Richard's reflections on the death of Queen Elizabeth II

Richard with his granddaughter Lola

Proud granddad with his granddaughter Lola, the daughter of Holly and Freddie Andrewes. Lola is 2 years old. Lola’s siblings are twins Artie and Atta (age 6).

Richard has a fourth grandchild Bluey Rafe (age 4), from his son Sam and daughter-in-law Isabella Calthorpe.

Richard and Lola in the pool

Richard with Lola in the swimming pool.

Richard and Sam on the houseboat

The first home Richard bought was a houseboat which he called “the Duende”, meaning “the power to attract through personal magnetism and charm”.

Richard has always preferred working from home in order to be near his children and family, and admits he has never sat in “the corner office” even when he became successful.

Richard tells of the humble beginnings of his great success, along with obscure office spaces and the challenges of their mail order business, which led to the first Virgin Records store.

From fines to being arrested, Richard and business partner Nick Powell pushed on and created their recording company which was the birth of their great success.